Heating of the roof: anti-icing system for drains, electric heating for snow melting, installation of an antilde 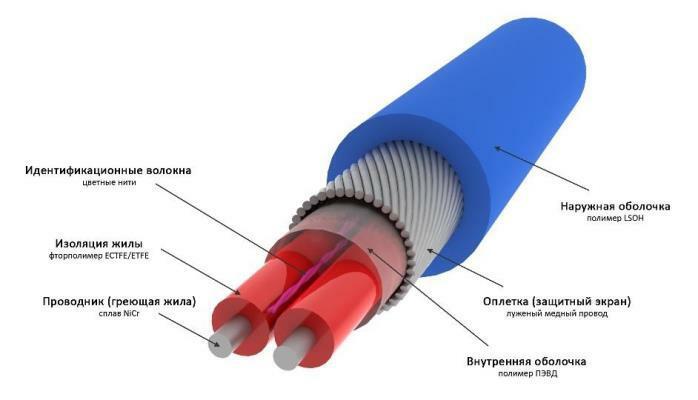 In order to protect the material of the roof and gutters should be properly heat the roof Icing roof in the winter becomes the cause of many problems. The aqueous crust leads to the formation of cracks and chips on the coating, and icicles pose a danger to life. To prevent unpleasant consequences, it is recommended to install a snow melting system.

What is an anti-icing system

anti-icing system - a device on the cableHeating of the roof and gutters. The operation of the snow melting system is due to electric cables. Topical such devices in the period of high temperature fluctuations, when the probability of formation of ice increases.

It is the ice on the roof and gutters that cause deformation of the material. The anti-icing system is also an important safety feature. After all, the work of electric heating does not produce icicles.

In 2004, a document was legalized, which obliged to install an anti-icing system on all new buildings.

With the correct design and installation of electrical heating, ice melts in time, and water is drained. This protects the roof from cracks and deformations. And the residents of houses and vehicles are not threatened by overhanging icicles. 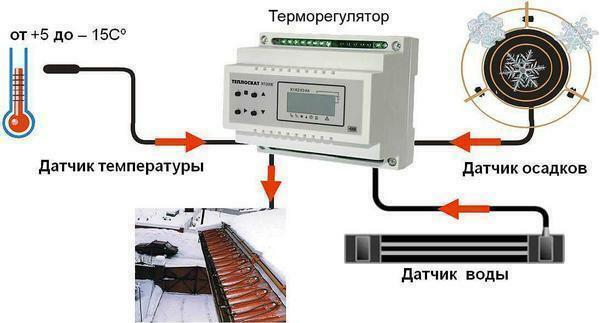 familiar with de-icing system can be easily online

Possible heating of the roof:

The choice of snow melting system includes a number of requirements for electrical cables. Take into account their power, reliability, stability. It is also important to have all quality certificates and licenses.

main element de-icing system - an electric cable. The power of the part may vary. Distinguish the linear version and self-regulating. In the first case, the power is constant, and in the second case it varies depending on the weather conditions. 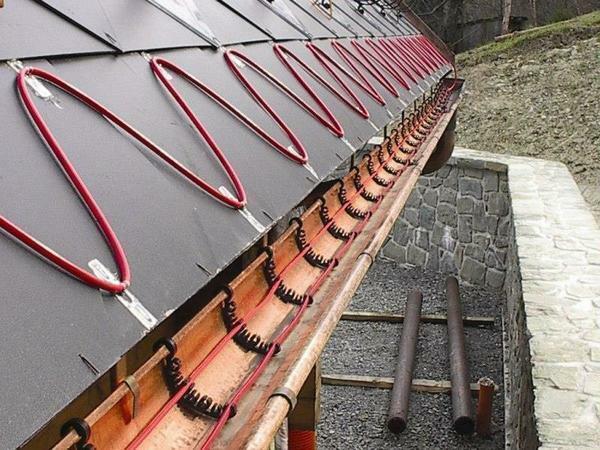 Typically, the anti-icing system circuit must include an electrical cable, a thermostat and an equipment cabinet

A cable with a constant power rating has a number of drawbacks. Roofing in different places can have different heat needs. As a result, it turns out that one part will lack power, and in another, the roof will start to overheat. When choosing this option, you should develop accurate cable length calculations.

The resistive cable will need to be cleaned permanently. The device will burn from debris or leaves from overheating.

Self-regulating cable refers to more expensive, but high quality anti-icing systems. This element is able to adjust to certain areas of the roof and reduce energy costs. Also, such a cable is simple enough to operate. It does not require regular monitoring.

The choice of cable power directly depends on the condition of the roof. The "hot" roof, the attic, which is used for living quarters, is best insulated. The lowest power is needed for the "cold" roof.

The principle of the snow melting system for the roof

The main function of the snow melting system is to empty the drain pipes for melt water. At any temperature, the liquid must move along the gutters. Electroheating continues until the snow melts completely. 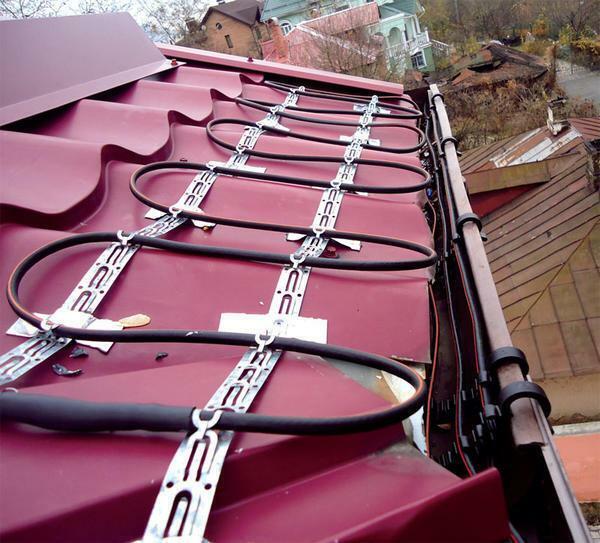 But there are other factors of influence. But the principle of action is quite simple. First, the system should analyze all the indicators of temperature and humidity. After that, the optimum mode is determined and the heating starts. This saves energy. This aspect is quite important, because the total power of the cable can be quite large.

For proper operation of the system, it is necessary to select high-quality materials and perform the correct calculation.

After determining the air temperature, the timer is switched on for a certain period of time. When this period passes, liquid and precipitation sensors are started. With excess snow, the heating of the roof and gutters is started. When the precipitation is over, the roof itself stops heating, but the functionality of the pipes and trays remains active. This is done so that the flowing liquid can not freeze in the drain. All the work of the system is fully automatic, which is convenient enough for the owner of the house.

Selection of cable for roof heating

The technology of the snow melting system is quite simple: the electric cable is fixed on the roof and along the drainpipes and elements. Precipitation quickly melts under the influence of heat and the form of liquid down drains runs down. The optimum temperature regime of the electric heating system varies from + 5 degrees to -10 degrees. There are 2 types of cables for operation: resistor and self-regulating.

Resistor cables are popular due to their low cost and simple installation. The principle of operation of such an element is the internal resistance to the electric current of the inner core. In the cable there can be several. They are equipped with one or two layers of insulation and a metal screen. 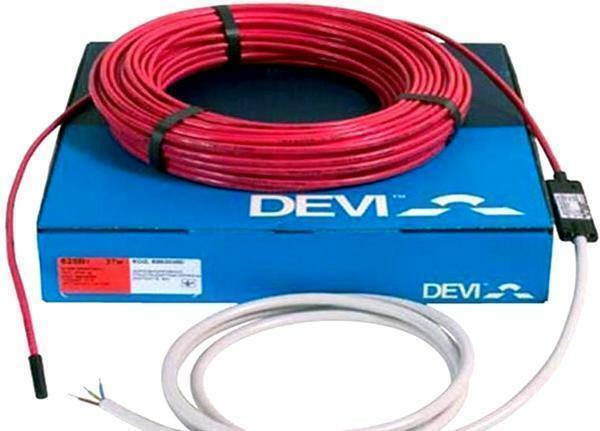 When choosing a cable for heating the roof, its quality, safety and other characteristics should be considered.

At the same time, there is a negative side to stable power. Different parts of the roof require different power indicators. As a result, the heat will either be insufficient, or the system will begin to overheat.

A zone resistor cable is often used to heat a roof. This option is considered the best because of the additional protection of the conductive core. The insulation is assembled with a nichrome thread, which transfers heat.

The zone system has a number of distinct advantages: the output power is independent of the length of the cable, only a separate zone is broken, not the entire mechanism.

Self-regulating cables differ due to the principle of operation from resistors. The temperature in this case is not constant. The principle of operation is the presence of a pressed polymeric matrix, which is located between two conductors conducting a current. It performs several layers of insulation and provides a metal screen. Such cables are used for large areas of roofs, since the length of the device is up to 150 m.

Among the disadvantages are the reduction in heating power due to wear of the polymer of the pressed matrix. In addition, self-regulating cables are much more expensive than resistors. High starting currents also stand out. The house must have reliable power supply for the use of such equipment.

Sequence of installation of the anti-icing system

It is impossible to carry out installation work without knowledge in the field of electricity with your own hands. To work will require some knowledge. Better to install a professional. For self-installation, it is necessary to take into account a number of rules and recommendations. 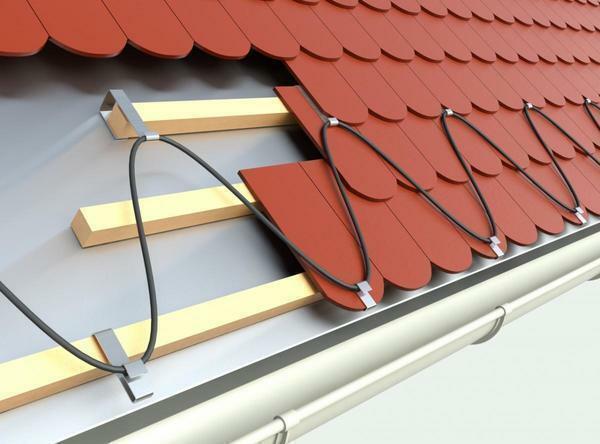 In order to install the anti-icing system, it is better to contact

To fix the cable in the pipes use a mounting tape or special tubes. A ribbon is also used in the gutters. To work it is better to choose a material of great thickness. This will increase the durability of using the tape.

The roof cable needs to be sealed in addition.

Installation of the snow melting system starts with preparatory work. Cut the cable, connect it with couplers and install it on selected sections. Then mount the boxes. Next, for each section, you will need to calculate the insulation resistance index. The next step is to install the thermostat alarm. The final work consists of laying the power and signal cables and the control panel.

How to properly heat the roof( video)

For the safe operation of the sewers in winter, you need to install an anti-icing system. The system is based on electrical cables. Installation work is better to entrust to a professional, because installation requires certain knowledge.

Do doors for fireplaces - aesthetic safety or safe aesthetics?

Kinds of fireplaces, from classical up to desktop