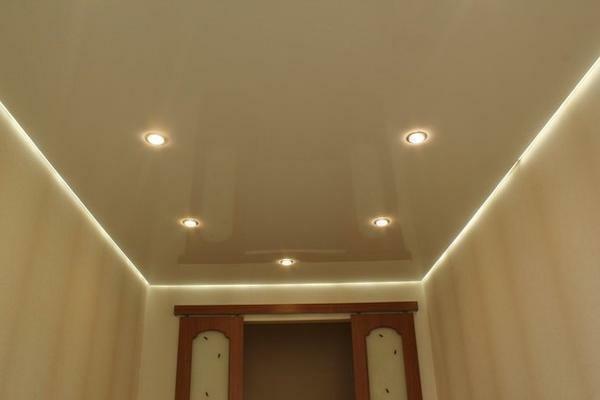 The floating stretch ceiling will be the perfect solution for those who want to bring in the interior the original notes Not every room is suitable for floating suspended ceilings. We learn more about what floating ceilings are and how to construct them independently.

Soaring stretch ceilings - what is this 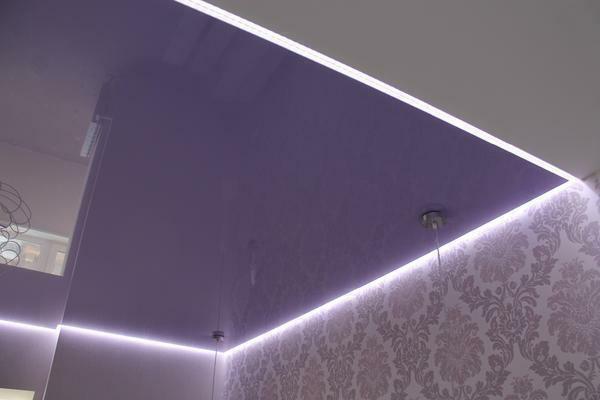 To install the floating ceiling, it is necessary to pre-assemble the frame

And special lighting, which creates a soaring effect of the ceiling. As an illumination for soaring ceilings, use LED strip, lamps and lamps, both monophonic and of different colors.

The floating ceiling structures can have a wide variety of shapes and designs.

The advantage of the LED strip is that it illuminates the entire ceiling zone evenly, distributing the lighting around the perimeter of the room.

Lighting can be either monophonic or multi-colored. When choosing the type of lighting, it is necessary to take into account the purpose of the room, its area, style and interior features. For small rooms in the area it is better to use one-color lighting.

The floating ceiling effect is created by unusual ceiling lighting throughout the perimeter and a special ceiling design method. Film film is mounted to the ceiling in a special way so that the light is reflected on all the edges of the ceiling. For this, a metal profile skeleton is created on the ceiling, which provides a distance between the wall of a few centimeters. In this space, after stretching the cloth, the lighting system is mounted. 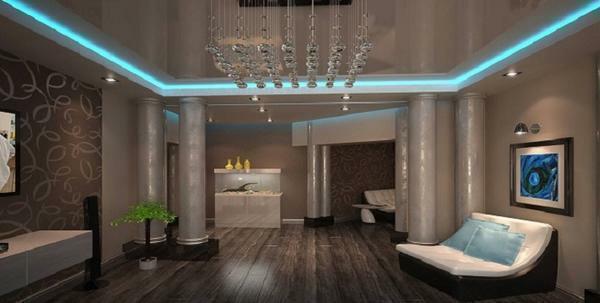 Lamps for a floating stretch ceiling must be of low power to prevent deformation of the structure, the formation of bulges and film blistering.

Due to lighting, the corners of the room and the space separating the walls from the ceiling are not visualized, due to the fact that the light separates the ceiling space from the walls, and causes the illusion of a floating ceiling.

The visual effect of a floating ceiling can be achieved by another method when overlays are used.

Vertical or horizontal overlays on the ceiling can be geometric figures. Common ideas of the central overlays are ovals, circles, rhombus, square. Depending on the area of ​​the ceiling, you can use several figures on the ceiling. Such figures from the profile can serve as a backlight if additional LEDs are installed under them. In addition to lighting around the perimeter, under each figure you can fix the lamp as an additional source of lighting. Round lining to the ceiling can be used to create various compositions, one of which can be the starry sky, the globe, the sun.

Geometric shapes are able to turn a floating ceiling into a real work of art.

Two-level and multi-level ceiling panels create a 3D effect, visually separate the ceiling, the room height seems to be quite large. If you use the profile as an overlay in the middle of the ceiling or on its sides, you get an incredible floating effect. In this case, the game of color will help. Combining several colors of the film, you can achieve a visual division of the room into zones.

Two-level linings on the ceiling in small rooms with a wall height of less than 2.7 m, visually hide the height, such constructions heavier the room and are not recommended for use in small rooms.

Using the overlays on the floating suspended ceiling, the room visually increases, this is especially advantageous for rooms with a large area.

How to make a floating suspended ceiling at home: recommendations

A stretched floating ceiling requires careful preparation of the surfaces before installation. 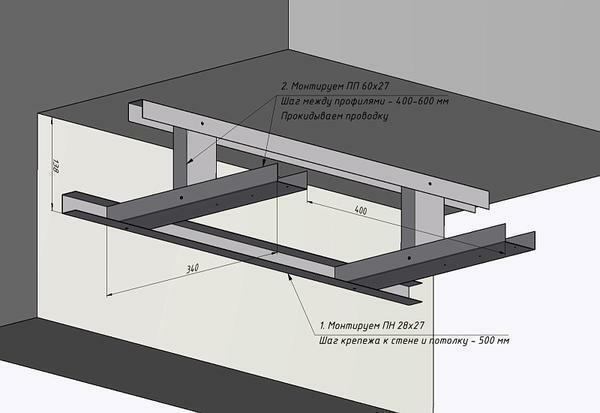 Frame made of aluminum profile - the basis of the floating ceiling

The surface of the ceiling must be cleaned from the old coating with a spatula, brush, paint and other elements to wash off the solution. The top layer of plaster from concrete slabs should be removed with a spatula. This is necessary in order to prevent peeling and falling from the ceiling on the film surface particles. Then the surface of the ceiling should be treated with anti-mold, fungus and moisture to prevent spoilage of the film web, which can suffer from exposure to unfavorable media and moisture.

You can install the profile after cleaning the surface of the ceiling in the following sequence: 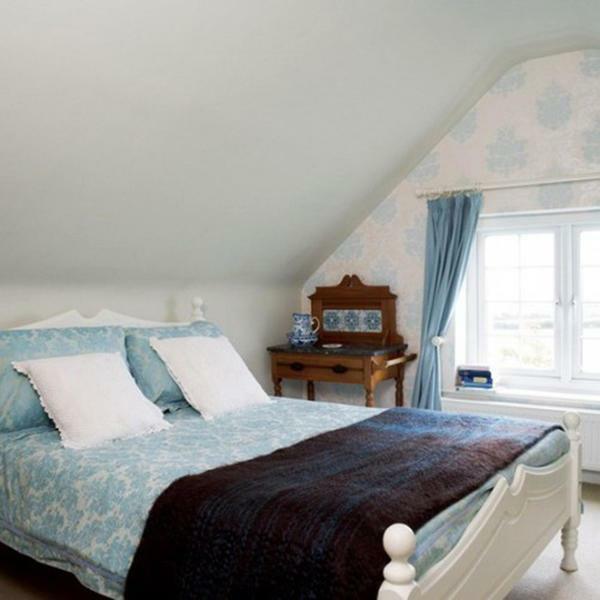 Design of the ceiling in the bedroom: photo room with beveled, ideas for the interior, 12 ka. M., And high ceilings, small with red 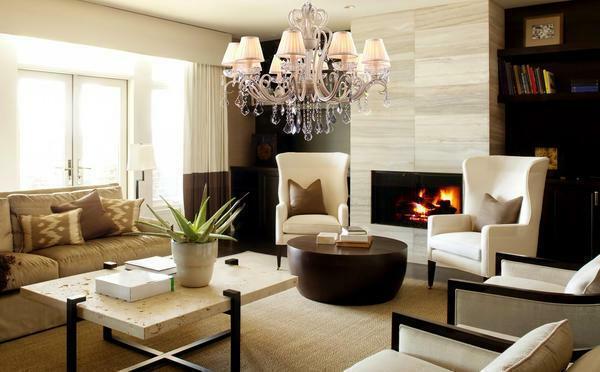 Chandeliers on the ceiling: three flat chandeliers and spots, photo decorations, a rosette under the white long chandelier in the bathroom, the design of the glossy ceiling, how to wash without removing 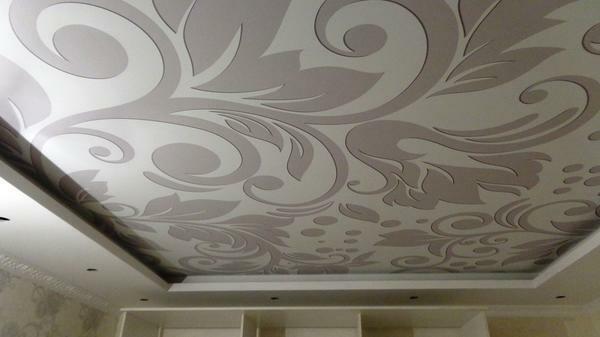 The texture of matte ceilings: photo glass, gray and white, acrylic and black, the advantages of plexiglas