Rope ladder: for children or a well, rescue or fire, for evacuation of LAN 10, sports units 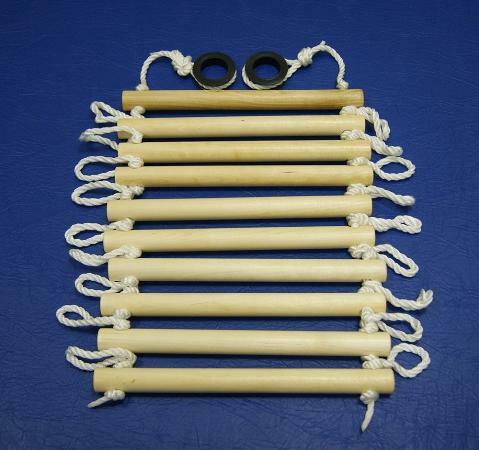 A rope ladder is indispensable for descents to the basement or ascent to a certain height. A rope ladder can be used to go down to the well, basement, fix the roof in inaccessible areas. It is also a success for rescuers and firefighters, and for children will become an exciting toy. Such a ladder is a necessary and convenient thing in the farm, which is sure to come in handy. At the same time, it occupies the minimum amount of space. Sometimes such a ladder is used even in interior elements. From the point of view of such a science as physics, such ladders are safe, since the knot on which they knit is quite strong. If desired, you can even make it yourself.

As already mentioned, the rope ladder can become a wonderful gaming device. In turn, these ladders are installed in children's playgrounds, where they become a kind of attraction for children. After all, what kind of games can not children come up with! 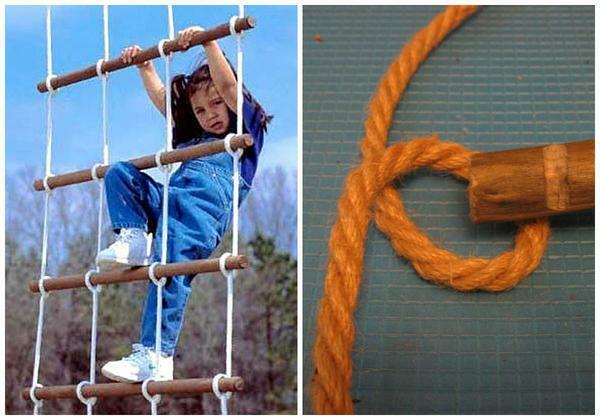 The rope ladder for a child is not only an excellent way to spend leisure time, but it can also act as a simulator

In addition to the toy, the ladder will serve as a good simulator, which will strengthen the children's muscles and bones, contribute to the development of the vestibular apparatus and reaction. It can be installed near the Swedish wall, where it will perform the function of inventory( as a ready-made sports complex), just like rings and ropes.

A child can freely use it to perform an exercise, or in a warm season it can be hung on fresh air, like an attraction, or used as a horizontal bar.

Strong rope ladder for a well

As you know, sometimes every well needs to be cleaned and improved. To descend into the mine, we just need a rope ladder. At first it is thought that the necessity of descent into the well of the well is not so great, but it is not quite so. For example, even when the structure is installed relatively recently, such a need arises if the chain is cut off, or a foreign object gets into the well.

It is convenient to use large portable stairs when the well is relatively shallow, in other cases it is better to use a rope ladder.

If you decide to make a rope ladder yourself, then for this purpose it is necessary to choose a quality and practical rope

For a rope use reliable, with good strength, ropes.

The rungs can be made of steps manufactured:

Without a ladder it will be impossible to service a water source and descend several meters deep into the mine. In addition, the rope ladder can be made by yourself. If you make a ladder of wood materials, then it is better to use protective equipment to ensure that the product has served much longer.

This ladder plays a significant role in saving people. It can be used to save people from the bowels of the mine, to carry out construction work, as well as for extreme sports. One of the models of the rescue ladder is LAN 10. It does not reach more than 10 m in length. 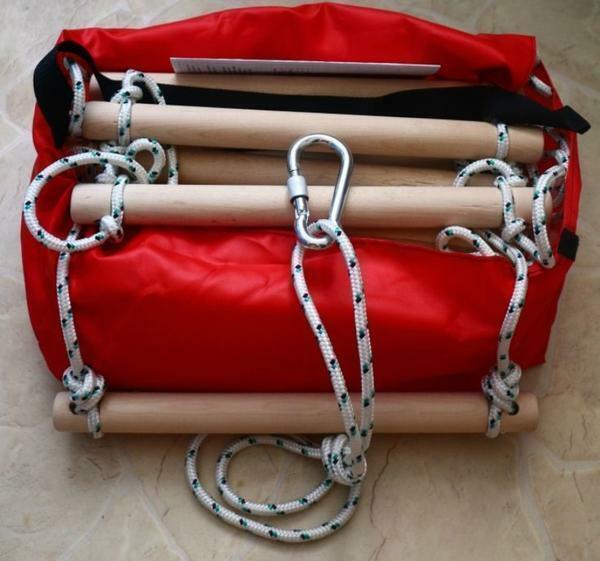 Also, the rescue ladder can be used for evacuation, but it is necessary to know that the distance between people on the stairs should not be more than 2 m. At the same time, no more than 4 people can be evacuated.

Advantages of this ladder are: its light weight, which allows you to quickly change the evacuation area, it can also be fixed on the elements of the building structure, and special equipment requires the necessary means of attachment and professional assistance.

The fire ladder, like the rescue, is used to evacuate people in fires, for emergencies, for ascending to high distances, to escape from dangerous altitude zones. Complete with a ladder is a carbine, a hammer( in order to break the glass) and a bag. Such a ladder is made of slightly flammable materials( they are covered with a protective compound), and reaches a length of 5-19 m.

Before using the ladder in the case, it is necessary to conduct tests. 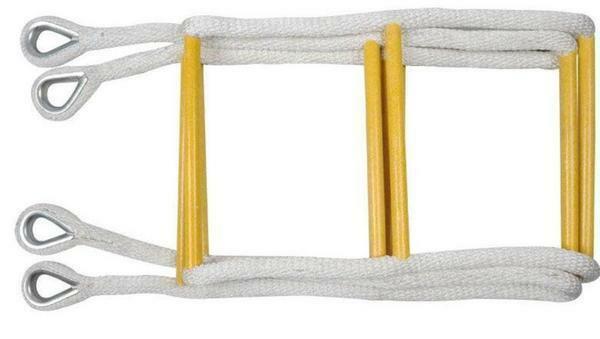 In the course of tests on the crossbeams and rope ropes there is a strong static load. The ladder is suspended, and a load is attached to the middle of the lowest step. If after testing the details of the ladder are not affected, then the document on the test results is issued. Later, upon completion of the audit, this result is recorded in the relevant act.

If the results of the audit were unsatisfactory, the notes are recorded in the certificate with recommendations, as well as the time of the subsequent verification. The ladder itself is taken out of service.

Evaluation of the state of the structure:

Rope ladders are very often used on ships. Rope mesh mounted on the ship, and serve as a lift to the mast. They are also used in the equipment of mountaineers, firemen, rescuers.

The stairs must be sufficiently reliable and safe. It is the nodes that attach the crossbeams to the rope. 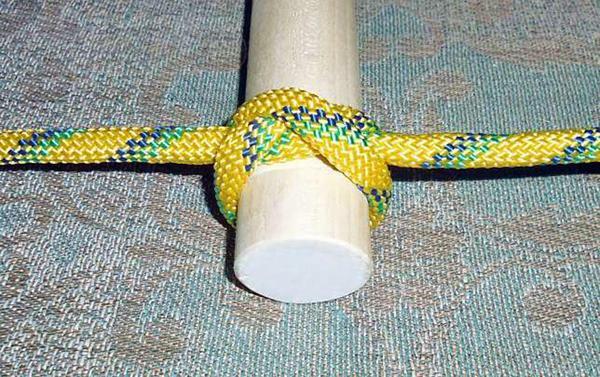 In order for the rope ladder to be strong and sturdy, it is necessary to learn how to correctly knit the rope assemblies with which the crossbeams are fastened.

There are several ways of fastening:

Knot Constrictor - to start knitting the ladder using the Constrictor knot, it is necessary to prepare the crossbeams: to retreat from the edge of each crossbeam to 5-7 cm, and make small incisions( grooves).This is done so that later the rope does not "go" on the step, and the ladder itself will be much stronger. Before knitting the knot, it is necessary to process the edges of the rope so that it does not begin to blossom during use, and only then knit a rope self-tightening knot.

The "eight" knot - the preparatory work consists in drill a hole at the same distance from each edge of the stage. Holes should be slightly larger than the diameter of the rope, its edges, as in the first case, must also be processed. We bundle the knot with a "figure-eight", then insert the rope into the hole of the step. The very same step should be fixed in the correct position, then two loops are made, with which we knot the knot.

"Burlatskaya loop" or "sea knot" - there will be no crossbeams. It is the rope that will serve as the steps of our ladder. However, this method requires a certain skill - the ability to knit knots.

We adhere to a certain order of knitting: twist the rope so that something comes out of it that resembles a figure eight. Then the lower part of the loop is stretched, after which a circle is formed, where the upper part of the loop extends later, exactly the one that resembles the figure eight. Then the assembly is fully tightened. Thus, you can make the number of nodes that you need. 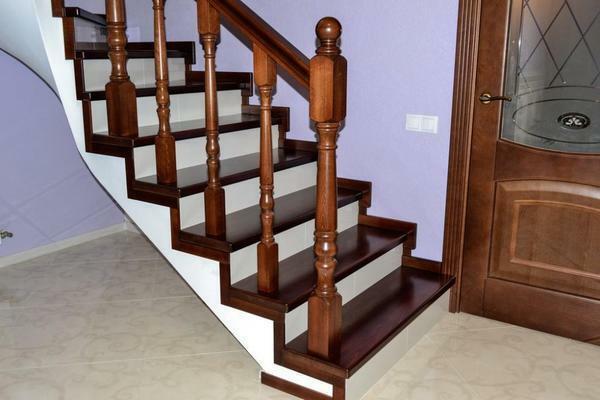 The slope of the steps of the staircase: the angle to the second floor, the slope to the meter of recovery, in the private house is optimal and steep 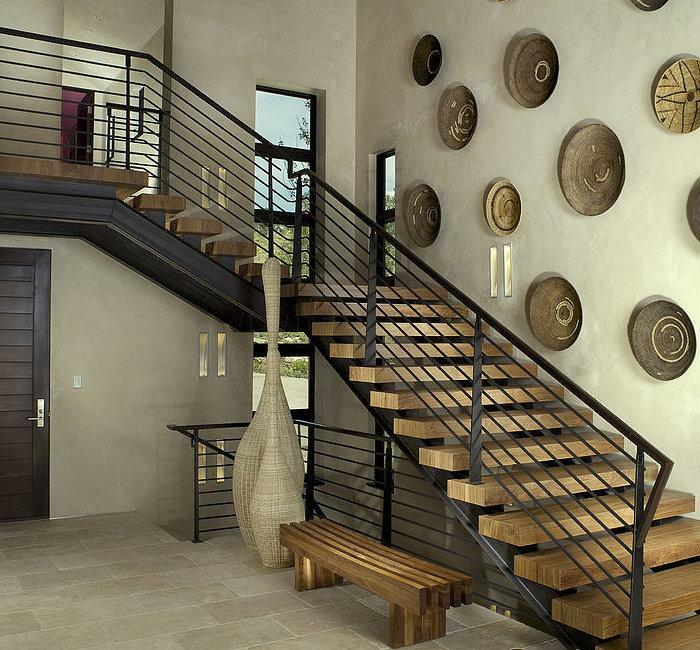 Staircase in the interior: photo of the hall and the second floor, part of the living room at home, white removable room, decorative children's room 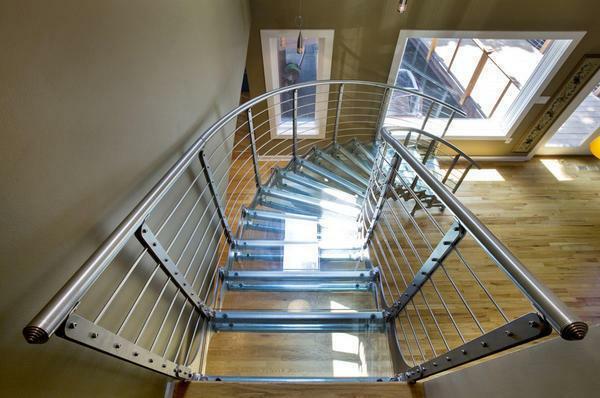 Installation of stairs: installation of the hatch for companies, second floor in the house, assembly by yourself, design and estimate