How to replace tactile tiles indoors

Tactile tiles are the main tool for implementing floor markings for visually impaired and visually impaired people. It is its use that is stipulated in the Codes of Rules and GOSTs for the Accessible Environment.

However, tiles for the disabled have a number of disadvantages that make them far from the best option for tactile markings.
In particular, there are often difficulties with installation, cleaning and maintenance in "working" condition.

The main disadvantages of tactile tiles:

However, there are products that are better than tiles according to one criterion or another. And they should be used if these criteria are important for the conditions in a particular room or on the street.

Moreover, markings can be laid in any required width, simply by adding or removing one row of indicators. It's incredibly convenient and adds aesthetic aesthetic to the tactile layout.

Indicators also win in terms of service life. It is, on average, 1.5-2 times higher than that of a tactile tile made of a similar material.

Well, installation with special stencils is much easier. It is possible to make the layout ideal in geometry even in the absence of construction skills and it will all be the same height. 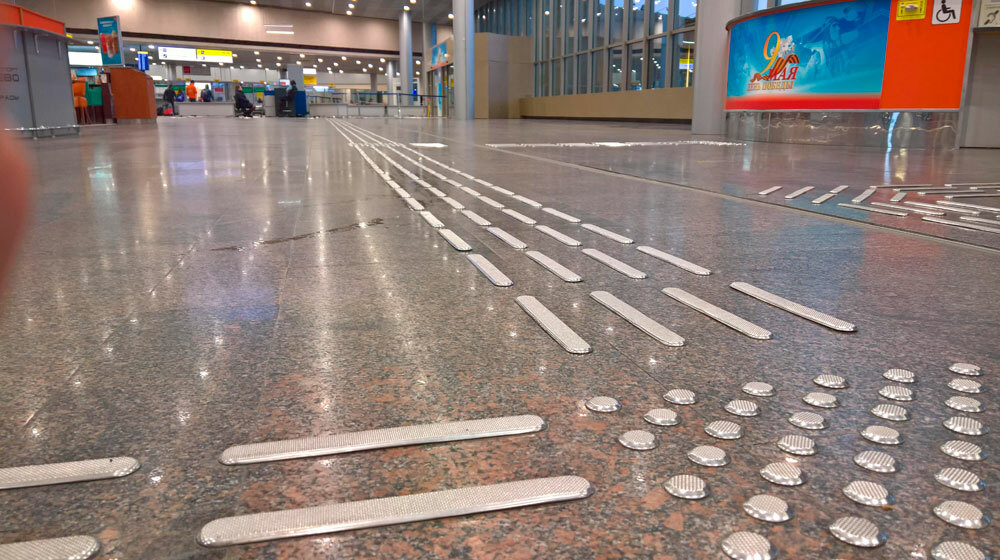 The worse the indicators:

The guide tactile tape can replace the 3-reef tactile tile. In particular, it can be used to implement two types of markings "Straight ahead" and "Zone for receiving a service".

Application is permissible only indoors. Moreover, with low traffic, since PVC or polyurethane used to make the tape is afraid of ultraviolet radiation, temperature changes and quickly wears out. 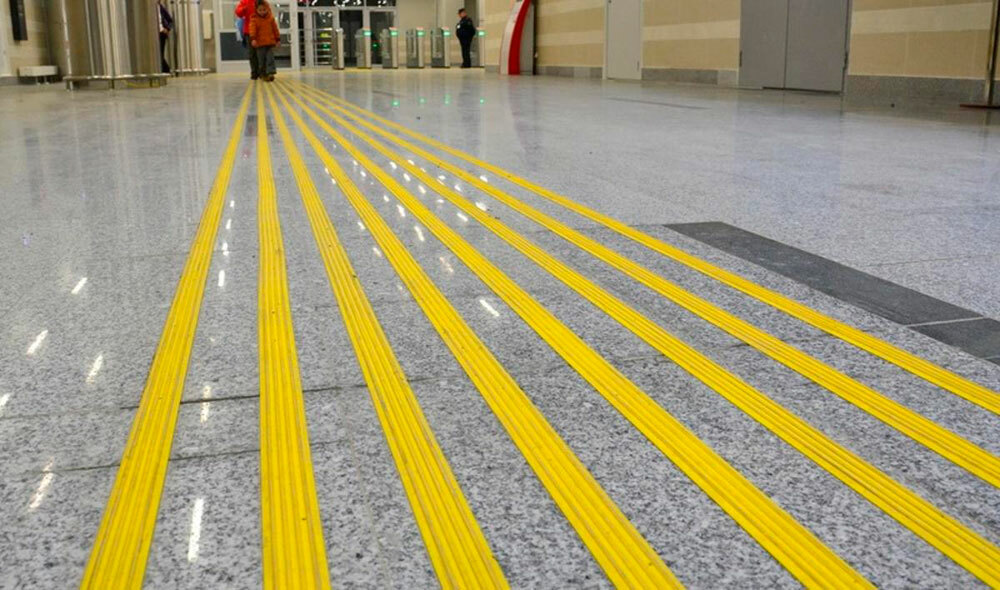 What the tape loses in:

In rooms where the flow of visitors is extremely small, but adaptation for the visually impaired is still needed, the tape is ideal.
You can do the markup literally in a day with minimal investment and forget about it for several years.

It is better to combine the tactile tape with tiles and indicators, which are also made of PVC and polyurethane. The similar softness and height make it easier and safer for the disabled to use the markings.

A relatively new type of tactile markings. It is an anti-mud mat with tactile indicators attached to the top.

The main area of ​​application is entrance groups. The block collects most of the dirt from the shoes of people entering, preventing it from spreading around the room.

This solves the main problem of tactile tiles - rapid contamination at the entrance to the building.

Cleaning the tactile flooring is carried out in the same way as the usual anti-mud mats. Can be removed and shaken out, or washed. 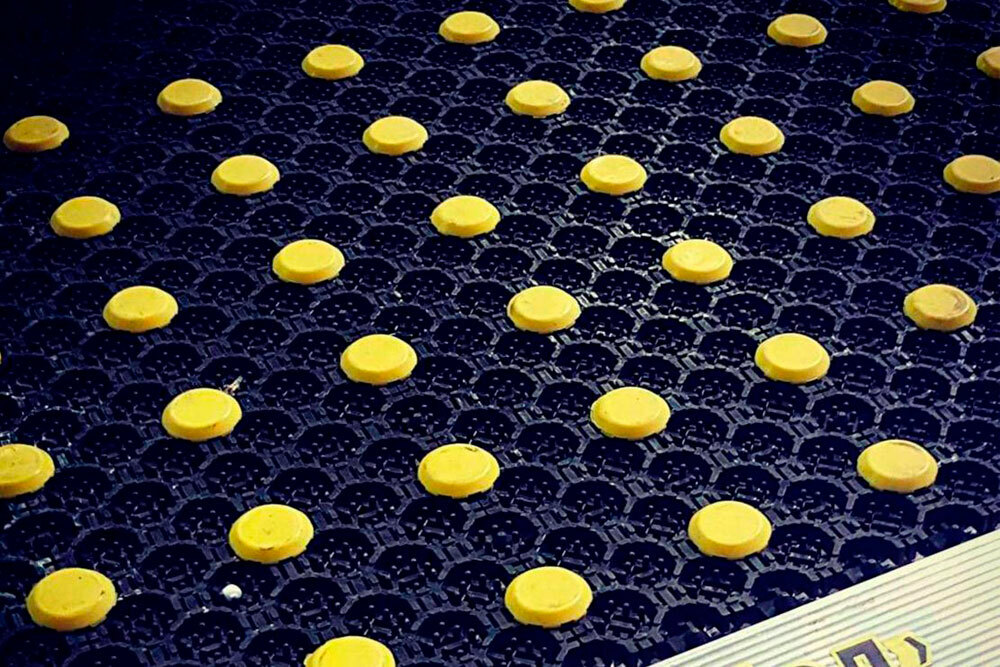 You can use a tactile anti-mud coating not only on the entrance lobbies, but also in any other areas.
The range of blocks available allows you to do almost any layout.

Are there any disadvantages:

Successful schemes for replacing tactile tiles with other floor marking tools are different in each room.
However, there are several universal solutions that fit most objects of a certain class.

1. Reducing the amount of dirt in the room.

At the front door, on both sides, there are anti-mud coating blocks with a “decision field” marking.
Blocks do not get dirty as quickly as tiles or indicators, and reduce the level of dirt brought into the room by 3-4 times. Especially important for objects with high traffic of people. 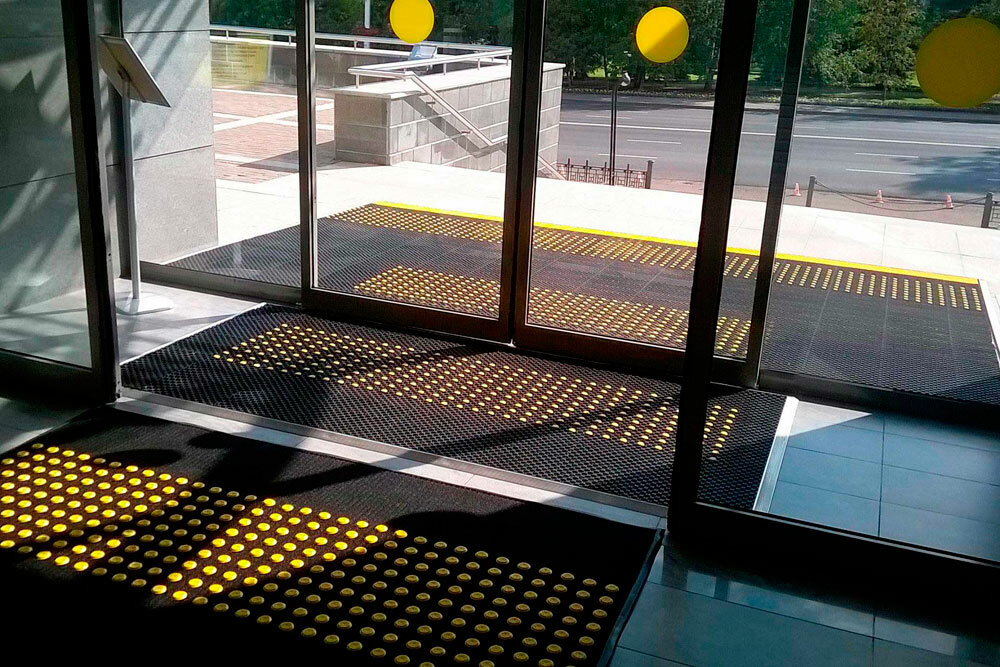 In organizations whose offices, due to the specifics of the work, are visited by a maximum of 20-50 people per day (in addition to employees), it makes sense to use soft tactile tiles and tactile tape for marking. With such a low load, polymer products will last for a long time. At the same time, they will be very cheap, and the installation can be done even on your own, since there is nothing complicated in gluing.

In rooms with an impressive number of objects requiring markings (doors, stairs, elevators, cash desks, reception windows, etc.), it is advisable to use tactile indicators. They will allow you to make markings in accordance with GOST (along the width of obstacles and waiting areas).

This is especially important if the organization is looking after its reputation and cannot afford an adaptation curve.

For low traffic, rubber indicators (PVC, polyurethane) can be used. With medium and high traffic of people, it is better to give preference to hard materials (aluminum, stainless steel, brass).

And it is optimal to use combined indicators made of steel, but with a recessed contrast insert made of some kind of polymer. 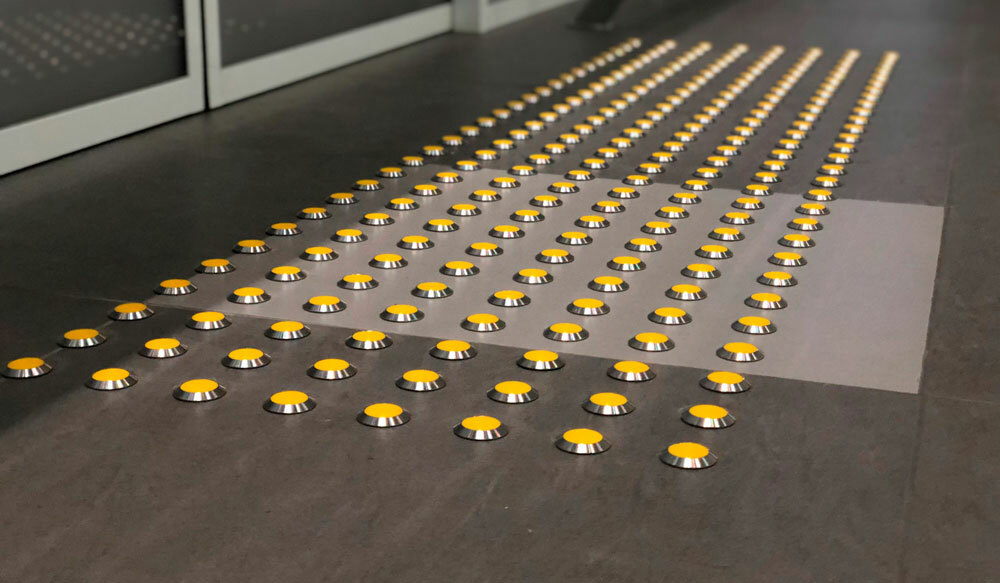 The plus is that such markings are clearly visible, in contrast to simple metal, but at the same time it has high wear resistance, since no mechanical effect on polymer inserts occurs.

Wall decoration with lining and plywood in the apartment 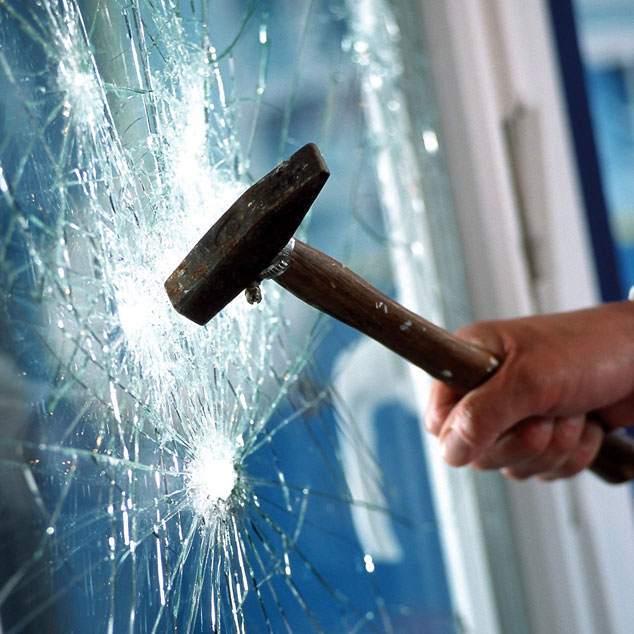 Panoramic windows: in a private house and apartment, pros and cons