How warm the house and the outside? Methods of insulation of facades

Foam - a popular material for thermal insulation of the house

Styrofoam (polystyrene) - material consisting of the air bubbles, placed in polystyrene. It is produced in the form of plates, different in density. It has good insulating and water-resistant qualities, but is vulnerable to the action of sunlight and is easily ignited during combustion releases harmful substances. If direct interaction with the liquid gaining moisture.

Technology process thoroughly demonstrates the video "How to insulate the house from the outside foam":

Mineral wool (rockwool) - fibrous material. It is produced in the form of plates and rolls. The density of the material ranges from 20 to 200 kg / m³. The main advantages of mineral wool are its excellent sound insulation, water vapor permeability and fire resistance. Among the shortcomings is the possibility of moisture absorption and, consequently, a loss of insulation qualities as well as the probability that it can be got small rodents. On the Internet you can find examples of the video "How to insulate the house from the outside with mineral wool."

Penoplex (extruded polystyrene foam) - a sample of the current generation of thermal insulation materials. Penoplex plates have high compressive strength, low water vapor permeability, resistance to combustion and minimum conductivity. Due to the low water absorption of this material it is possible to work in all weather conditions. Plates from Penoplex easy to cut with a knife and quickly mounted. To become more familiar with the technology Penoplex insulation, can be viewed on the Internet themed video "How to insulate the house from the outside Penoplex their own hands."

Polyurethane - liquid heater, which use the technology provides no gaps and joints. When the polyurethane foam insulation does not constitute thermal bridges that contribute to condensation and wetting the wall. It has no hygroscopicity, it can be used as a waterproofing and environmentally safe. Different morozoustychivostyu and heat resistance.

Insulation in the form of large rectangular slabs on the basis of basalt fibers. Among the advantages: excellent soundproofing, high thermal insulation, fire resistance, resistance to high temperatures and its extremes, water resistance. Insulation of basalt slabs is not affected by the process of decay, it does not infest the mouse and other rodents, and thanks to a sufficiently large size slabs, quickly and easily covers a large area walls. Sufficient insulation density allows to arrange a layer of decorative coating on the front of the wall. Operating time reaches a hundred years.

A lot to keep a comfortable temperature in winter and at the same time to save money, try to insulate the house from the outside with his hands. Reasons for this can be many: from the slits, drafts and ending with the weak functioning of the heating system. But still, the main source of lowering the temperature in the house walls are made of materials that do not have insulation properties.

Deciding to insulate the walls, it is important to know that the processing should be subject to exactly the exterior of their hand. inside wall insulation will lead to the fact that the insulation stops heat access to the wall surface. Dew point moves to the room side, which would entail formation of condensate and humidity. This will lead to the emergence of the fungus, so detrimental effect on the human body.

Ways to insulate the outside walls of a private house, there are several: 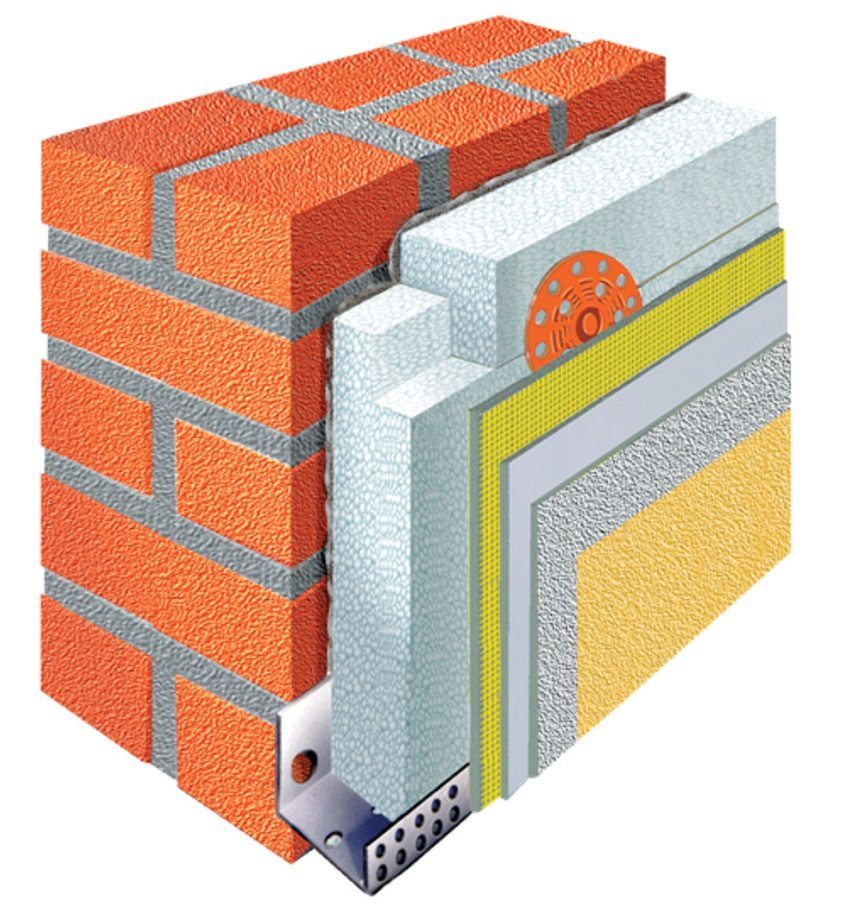 Decide how to insulate brick houses from the outside, it is necessary to bear in mind that every option thermal protection device has its own technology and, depending on it, can be produced in different season.

Once you determine what to insulate the wall outside the house, you need to start preparing the wall surface to the processing of insulating composition. First layer removed old plaster or other finishing material exterior walls. If the surface has irregularities and cavities, they must be completely level with a solution, and all convexity skived flush with the wall.

Further, the wall should be thoroughly cleaned from dust and debris formed as a result of removing the plaster. Then primed using a solution with a deep penetration.

From how becomes smooth layer of insulation depends on the further finishing of the walls or lining device. For this purpose pitches and lighthouses. The upper edge of the wall surface are fixed anchors, they hung up the thread with a plumb line, and lowered them down. With horizontal threads arrange control surface mesh for a guide in the frame unit or directly to the insulation.

From high-quality preparation of the surface of the walls under insulation will depend on how the insulated wall of a brick house outside.

Before installing the wall insulation is treated with a special primer

As his hands to warm the house and outside Penoplex foam

Insulating panels and foam Penoplex used mainly for thermal insulation of brick, block and concrete walls of houses. When the outer wall surface of the prepared begin to insulate a house from blocks outside. If the insulating material is a foam, it is important to dry thoroughly the wall, otherwise the material may be fed to lose moisture and heat insulation properties. This nuance is especially necessary to take into account before you insulate the house from the outside blocks.

How to insulate a house of foam blocks outside of the foam for subsequent finishing decorative plaster? Sheets of foam Penoplex or attached to the wall using a special adhesive. To the first row of tiles to glue evenly to the bottom edge of the wall it is recommended to fix the finish bar. After applying the adhesive, the sheets are pressed with slight pressure against the wall. It is possible to further lock plates with dowels, fungi in the center and in the corners of the sheet. With controlled level and plumb plane deposited foam layer.

Once the first layer is tightly adhered, proceed to the next installation. It is recommended to displace the foam sheets of the second layer relative to rows of the first layer. This will allow the dowels to hold the middle of the sheet of the previous layer of foam.

Wall insulation foam with your hands: step by step guide

Features of the foam and its use as insulation on the external walls.

In places where the windows and the corners of the walls, set the frame of the bracket, which is attached to the heater. Connecting seams sealed with tape reinforcing. Once the insulation is applied to the walls, the surface reinforced plaster grid. Next, the surface is treated with primer and plastered. Should be closely monitored so as not had cracks and gaps through which the visible insulation.

For greater structural strength of the insulation plates secured to the wall by means of dowels, fungi, and glued joints reinforcing tape

Useful advice!If the heater protrudes penoplex, surface treated plates prior to mounting the needle roller to give it a rough structure. This is necessary for better grip Penoplex with the wall surface.

How to insulate the house from the outside of the foam block using rails? First, the frame is manufactured. The width of the strips to the carcass must be greater than the thickness of the heat insulating material - whereas between the foam material and facing a cavity for ventilation. The distance between the frame battens to be slightly less than the width of the inserted insulation sheet, so that it is firmly held between them on spacers.

How to insulate the house from the outside with mineral wool

Many are used for thermal insulation of mineral wool. This type of insulation is suitable for the home, the walls of which are constructed from blocks, Brick or wood. To mount a heater was quality and reliable use of the frame rails. There is also use a method of spreading, t. E. the distance between the batten strips should be slightly less than the width of mineral wool slabs. It is possible to achieve a dense occurrence of insulation between the frame struts.

If warm log house from the outside, the walls of which have an uneven surface, a two-layer mineral wool slabs used with different density layers. Looser layers of insulation provide a high-quality adhesion to the uneven surface of the logs. For arranging wind and hydroprotection mineral wool for insulation of walls can be used a plastic film. As a decorative facing material is used brickwork, siding and other materials.

Slabs of mineral wool are very easy to install

How to insulate wooden houses outside their own hands

How to insulate wooden houses from the outside to the facade remained outwardly aesthetic? Experts recommend doing this using mineral wool, paying attention to what should be provided water vapor permeability of the walls. As vapor barrier a polyethylene film or aluminum foil.

Arrange vapor barrier with slats. They are fastened to the front and vertically to them with staples installed vapor barrier material. Once these steps are cased facade decorative material.

EXAMPLE ventilated facade arrangement with a framework of wooden laths

As insulated square log house from the outside, using mineral wool? Before you insulate the home from a bar outside, check out the main stages of the process:

For a more complete picture of the performance of thermal insulation technology works and exploring views experts that better insulate wooden house from the outside, ask for information, which is online. Reviews of masters and owners of the houses from the video "How to insulate wooden houses outside" will be particularly useful in this regard.

Given the fact that the walls occupy a large part of the area, warming their ability to give the maximum effect of heat preservation in the house.

Red wallpaper in the interior, the principles of formation of contrasts 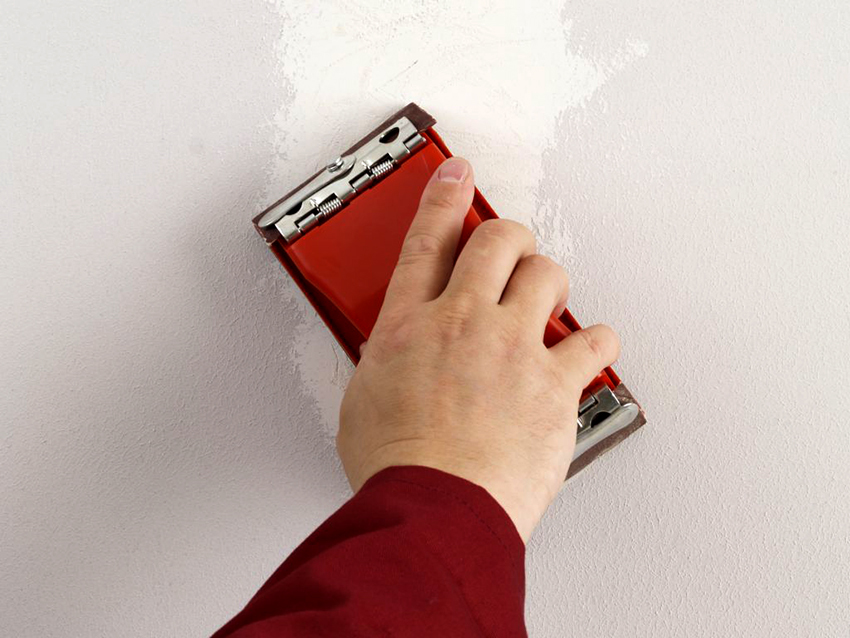