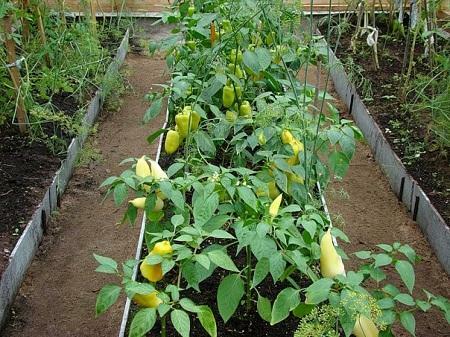 With proper care can significantly improve the quality and quantity of the crop in the greenhouse Pepper - quite demanding vegetables. However, despite the difficulties of creating optimal conditions for the cultivation of this vegetable, pepper was and remains a favorite plant of many gardeners.

order to grow seedlings for the greenhouse, you must first plant the seeds in spetsialnye pots. Seeds of pepper pass selection and disinfection in 1% solution of potassium permanganate, after which they are washed and processed with a growth stimulant preparation. Seeds are dried and after that they can be sown in the prepared soil. 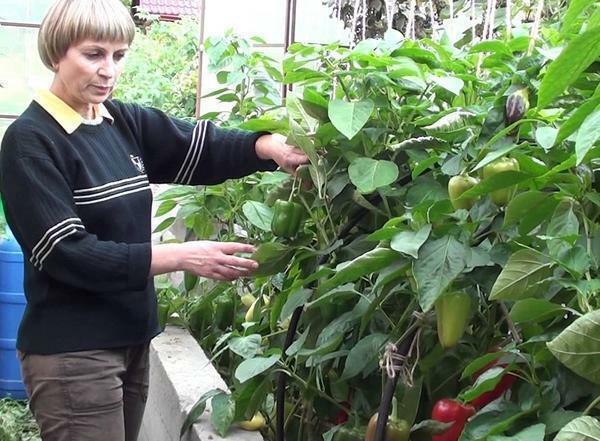 earth with the addition of peat and humus in the pot should be well wetted and soiled. Pepper is sown in grooves to a depth of not more than 1.5 cm. The temperature for seed germination should be fairly warm 25-27 degrees Celsius. But as soon as the first shoots appear, it needs to be reduced by 10 degrees, so that the seedlings do not grow quickly, but gain strength. After a week, the temperature should be raised to 22-26 degrees and then maintained throughout the growing season.

A fertilizing is important for plants, but you can make it when several leaves appear on the stem. To make top dressing is better in the morning, until the sun shines, after fertilization, water with ordinary water.

fertilizing can be prepared independently - 10 liters of water defended take 30-40 g of superphosphate, 10 g of potassium salt and 8.5 g of ammonium nitrate.

After the appearance of the fifth leaf, seedlings need artificial light with a blue spectrum - you can use special lamps for greenhouses.12-hour lighting for seedlings is very important at the stage of cultivation.

15-16 days before planting seedlings in the ground, you need to begin to season the pepper with sunlight. To do this, you can take out the boxes with seedlings on the balcony or put on the windows on the south side, so that the sun as long as possible heats the plants.

7 days before planting, all the seedlings can be fertilized with potassium top dressing, and for a couple of days to process the leaves of sweet pepper with "Elina" solution for resistance to various diseases.

Before planting pepper in the soil, you need to make sure that the age of the seedlings should be more than 55 days, on the stem there are at least 12 leaves of bright green color. The ideal time to land in a greenhouse is April, when the soil under polycarbonate has warmed up to + 15 ° С.

Soil in the greenhouse also needs to be fertilized with humus or compost, but not fresh manure!In fertilized land, you can start planting seedlings of Bulgarian pepper.

Planting and its density depends on the height of plants:

Greenhouse beds are placed at a distance of at least half a meter from each other, the optimal width of the bed is a meter.

Sweet pepper in a greenhouse: care for seedlings after planting

To get a good crop of pepper in a greenhouse, you need to provide it with timely irrigation, heating and access to the sun's rays. Pepper loves warmth, so you need to protect it from drafts and wind.

After planting pepper seedlings in the greenhouse, it should be slightly watered

If there is a lack of moisture on the peppers, brown spots appear, the leaves wither and turn yellow, and the flowers fall off. Frequent watering can also do harm, from the excessive amount of water in the soil, the roots of the plant begin to rot and the plant dies.

The greenhouse should protect the pepper against temperature changes, while inside the structure should not be too hot. The optimum temperature is 20-27 degrees Celsius.

Pepper is very popular with some pests - caterpillars, aphids and spider mites. Therefore, it is important to inspect plants as often as possible and at the first signs of the appearance of insects, you need to treat seedlings with special preparations.

For the entire vegetation period, pepper is required in top dressing only two times. For the first time fertilizers should be introduced 14-16 days after transplanting the sprouts of Bulgarian pepper into the soil, the second one a month after this.

Bird droppings are considered to be economically and environmentally beneficial fertilizer, but you can also use "Pantafol" or "Maxirocrop".

For proper development of the sweet pepper bush, use of the stepson is to remove excess young shoots from the pepper stalk. It is also recommended to remove diseased, dry and wilted leaves.

Changing the color of the leaves to blue or red is considered a symptom of a lack of phosphorus, which must be supplemented with phosphate supplementation. The temperature under the shelter should be above 20 degrees.

The lack of potassium affects the slowdown in the growth of seedlings, the wilting and drying of leaves or the dropping of the ovary. In this case plants need special fertilizer.

Experienced gardening advise as often as possible to loosen the earth so that the roots of the plant receive oxygen for better growth and development.

How to care for the pepper in the greenhouse: the features of the parsing

If there are many shoots on the pepper stalk, the leaf density may cause poor light access to the fruit. To solve this problem apply pasynkovanie.

Pasynkovanie - removal of young twigs together with leaves and inflorescences from the main stem of pepper. 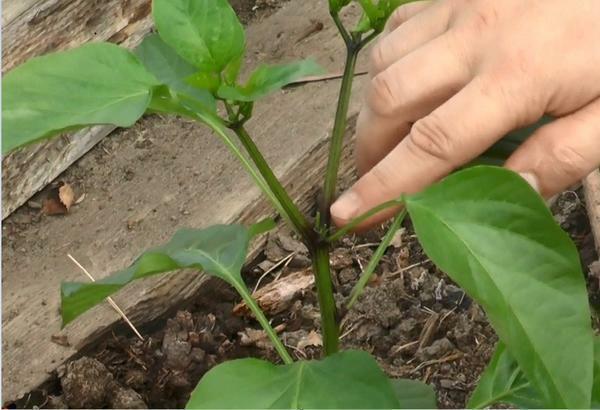 Pairing can be done with both hands and with scissors

Timely removal of shoots will increase the yield and development of larger peppers.

When forming low varieties of Bulgarian pepper, you need to pinch the top of the plant to make the bush more compact. If the twigs grow too close to the ground, they can be cut.

Pasyning is not recommended if pepper seedlings are planted at a great distance from each other, peppers like to touch leaves and branches with neighboring plants. It is also better to remove shoots if the pepper has reached a height of 35 cm, and when the first ovary appeared.

Patding should be carried out with a sharp object, which should be treated with a disinfectant after each pepper bush. When you infect one of the plants, you can kill the entire landing of peppers.

When deleting stepsons, do not forget that you need to leave 5 pieces on the stem. Leaving the most successful processes on the top, the lower weak ones need to be removed. Excessive leaves that cover the sunlight's access to fruits are also removed.

In places where the ovary did not form, sprouts may appear again, therefore every 2 weeks it is worth to inspect the pepper for new shoots. When they appear, they need to be removed so that new twigs do not interfere with the fruits to develop properly.

Sweet pepper planting and care in the greenhouse: diseases and pests

Even with a lot of effort, the sweet pepper in the greenhouse is susceptible to various diseases. Diseases of peppers are very diverse, but none of them can not be left without attention. 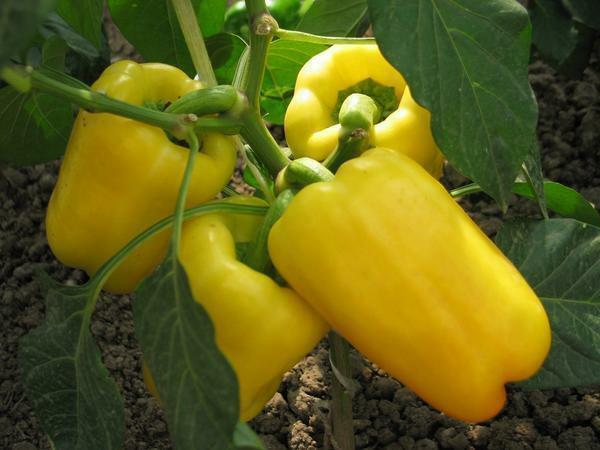 The most known misfortune is considered to be aphids, which feeds on plant juice and lays eggs on the leaves. When a plant appears on one plant, aphids spread fairly quickly to neighboring bushes. These small pests are very difficult to withdraw. You can treat the plant with special preparations - "Funfanon", "Keltan", "Carbophos".You can also use folk methods - spraying with soapy water or a mixture of ashes, water and soap. With these solutions, sprinkle Bulgarian pepper every morning until the pests disappear.

Spider mite lives on the inside of the leaf. To get rid of the scourge, you need to spray the pepper with a solution of a bowl of onion for 10 liters of water with the addition of a spoonful of liquid soap.

Slugs that leave holes in the leaves and spoil the fruit are afraid of quicklime. To get rid of the Colorado potato beetle, the drug "Commander" or manual collection of insects from the leaves of pepper will help.

In order not to start the disease of Bulgarian pepper, you need to periodically inspect the plant itself and the fruits and, at the slightest signs of the disease, begin effective treatment to save the crop.

The main problem of sweet pepper is rotting and wilting, which can be triggered by a number of diseases.

Prevention of diseases consists in choosing the right seeds for seedlings, a good place for planting and proper care of the plant. To protect the plant from diseases, it is recommended to treat the pepper in the greenhouse with the "Privikur" solution once every 30 days.

Care for peppers in the greenhouse( video)

To grow a full-fledged healthy crop, you will have to work hard. However, the efforts will be rewarded with large, bright, juicy fruits that are suitable not only for consumption in raw form, but also for canning for the winter. 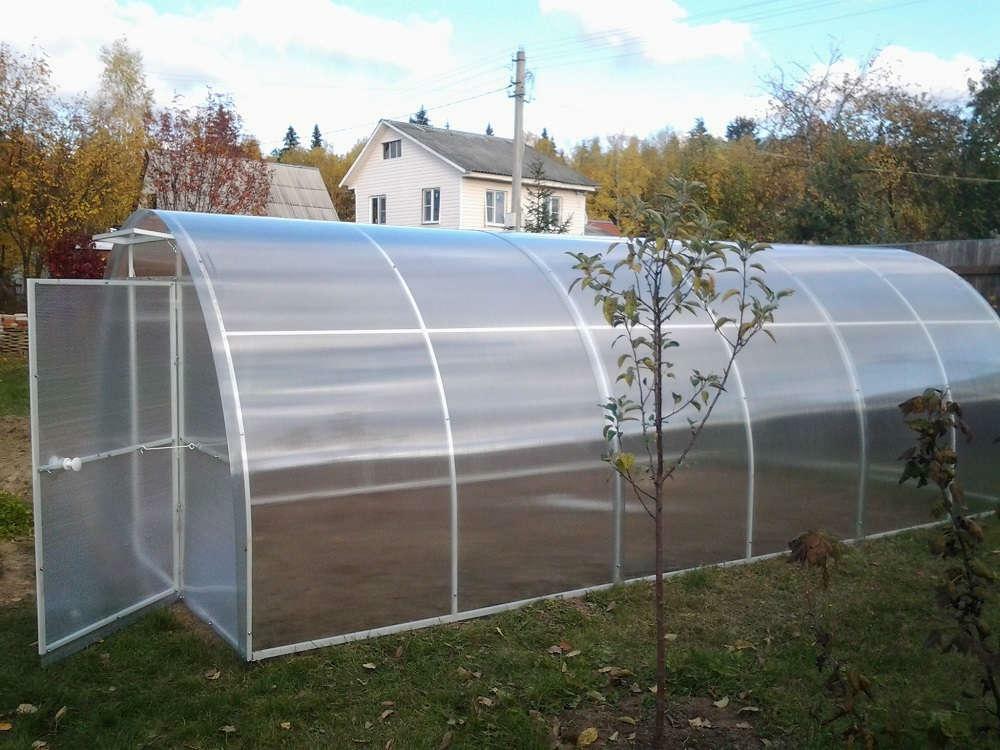 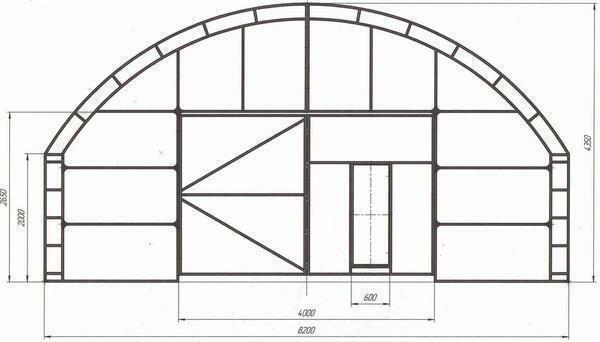 The best greenhouse projects with their own hands: drawings and video from polycarbonate, winter design and device 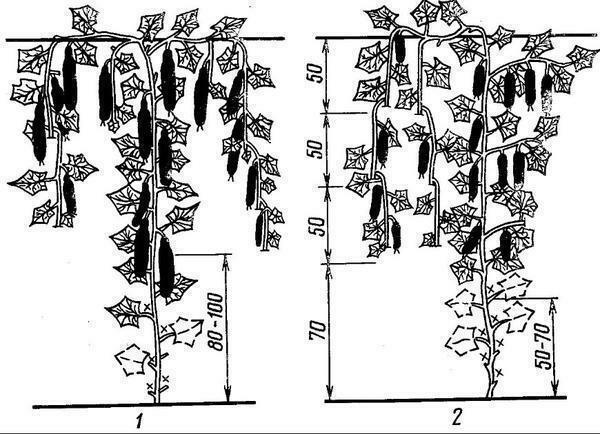 Pasynkovanie cucumbers in the greenhouse video: the correct scheme that you need and care, photo