Warming of the ceiling in a private house with their own hands: with a cold roof, how to insulate, the better from the inside, video 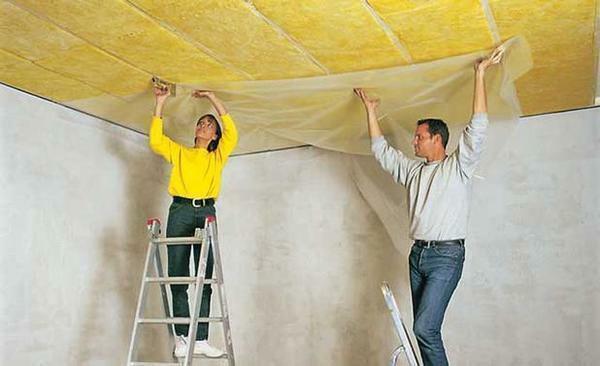 Thermal insulation of the ceiling in a private house will not only reduce heat loss in the cold season, but also save on heating The heat loss of the building in winter is about 15%, so the question is how to insulate and what to insulate should always be serious. And there are enough nuances in this matter.

How to insulate the ceiling in a private house: materials

Than insulate the ceiling in a private house: materials

If you have taken this work yourself, especially carefully choose a heater. To insulate the ceiling from the inside, virtually any mixture, and in addition, all kinds of tiled and polymeric materials. And to them, in turn, include expanded polystyrene, mineral wool and foam foam. 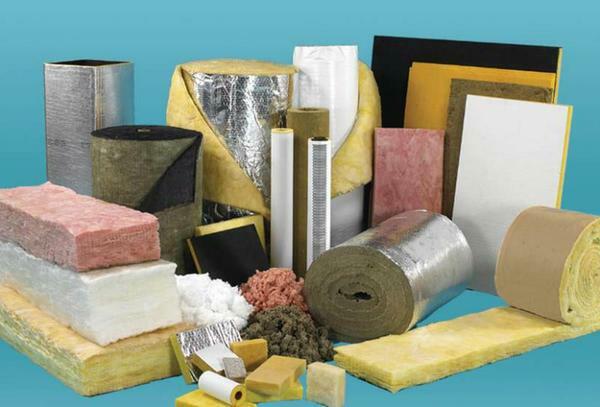 Styrofoam, mineral wool, polystyrene and other materials have been successfully used as thermal insulation of ceiling slabs

Works from the outside can be carried out using the following materials:

Well, the actual insulation can take place in two ways.

Ways to insulate the ceiling in a private house

You can insulate the ceiling surface indoors, or in the attic, that is, from the outside. The ceiling insulated inside may be so only if the ceiling height allows this procedure.

As the process consists of:

All this "sandwich" can take from 15 to 40-45 cm of the height of the room. Experts also advise to make internal insulation, if the attic is used as a warehouse. And also in the event that the attic carried out communications systems. These can be air outlets and electrical cables.

To insulate inside and requirements more, the work must be done carefully and neatly.

How to insulate the ceiling in a private house: the step-by-step action scheme

To properly and effectively insulate the ceiling, you need to know the main points of this process. 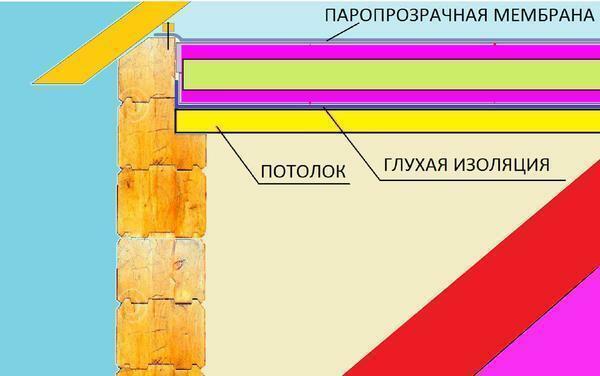 The ceiling insulation scheme assumes the use of a thermal insulation, a hydro- and vapor barrier and a lining material as a finishing coat

Ceiling insulation scheme in the house:

There are insufficiencies in the insulation of the ceiling inside the premises. In this ceiling can not be built fixtures. This is explained by the fact that in the process of working, the lamps will heat up quite strongly, and the layer of thermal insulation will not allow this heat to escape. So the lamps in the lamps will quickly deteriorate.

Insulation of the ceiling in a private house outside

And here there are also several ways of insulation - foam, mineral wool, foam insulation. First, of course, bring the attic in order. Remove everything from it so that only the beams and the ceiling remain. For external insulation of ceilings in a private house, sawdust with cement, expanded clay and other bulk materials is often used.

The attic is well ventilated, therefore reconsider the ventilation system, if necessary, seal the slots so that the thermal insulation layer does not get wet and leaveThus out of order.

If you use foamed plastic for insulation:

Minvat lay flat with all the beams overlap. The principle of laying out - brickwork.

This method has its own nuances, that's why it will be difficult to deal with one's own forces, usually they turn to specialists. Since special equipment is required for work. 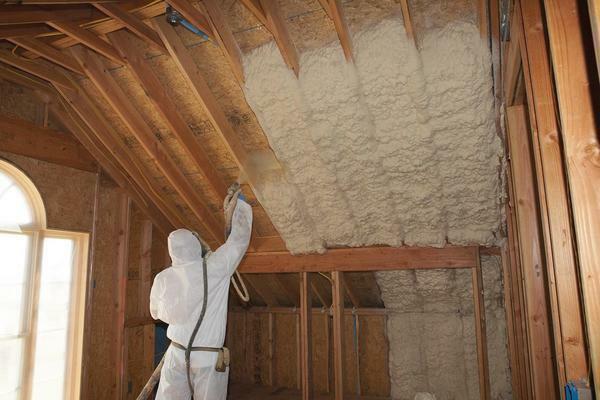 As a rule, foam insulation is made by specialists with the necessary equipment and professional skills.

Penoizol is a powdered insulation that the special machine blows into inter-beam space. This method is complex, as it is necessary to ensure sealing, so that the insulation does not get into the living space.

Usually this kind of work is trusted by specialists or those who have already had experience of such warming.

What should be a heater

There are not many requirements for it, but they are quite serious. Firstly, the insulation must be fire-resistant. That is, it is very difficult to ignite or not to ignite at all. According to the security rules, he must restrain the fire 25 minutes( the norm for a private house).

If your ceiling is a reinforced concrete slab, you do not need to seal the ceiling. Well, the ceiling on wooden beams needs a vapor barrier layer.

Docking places of thermal insulation and load-bearing external walls are subject to the warmest insulation. To insulate these places, the outer wall is embedded with a heat-insulating layer, the width of which is not less than half a meter.

Types of insulation for the ceiling( video)

Insulation of the ceiling in a house with a cold roof: ecowool

This insulation is not as popular as mineral wool, but this circumstance is obviously temporary.

Consists of ecowool from fine cellulose fibers, it can be laid both wet and dry. With a dry method of laying, the ecowool is scattered from the outside of the ceiling ceilings

Ecowool can be laid with any layer, even in a compacted form it will have a light weight. Its airiness just provides a reliable insulation of the ceiling. This insulation prevents molds and other microorganisms from forming.

In production, this material is treated with fire retardants, because it is a low-flammable material, besides self-extinguishing. Ecowool forms a sealed, seamless coating, because this insulation protects well from heat and cold.

Since cellulose wool is a breathable material, moisture will not be retained in it.

And in the foam block ceiling, both in reinforced concrete and in wood, there are no such properties to give up insulation. Get quality modern materials, fireproof and environmentally friendly. 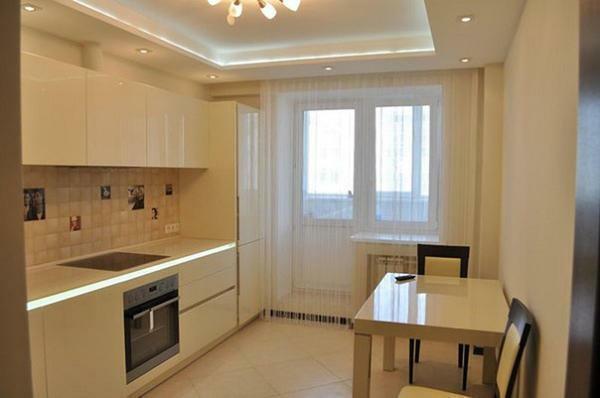 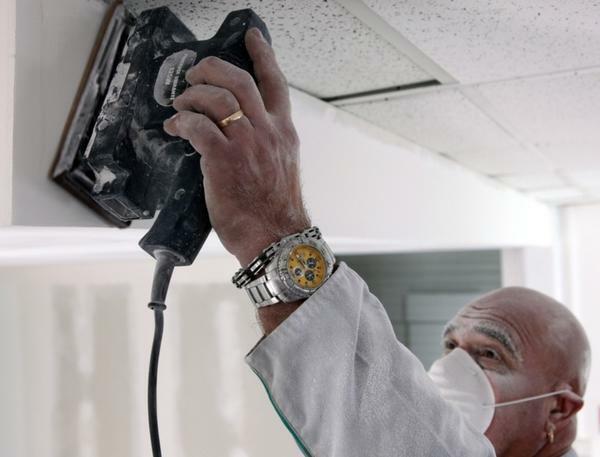 How to prepare a ceiling for painting with water-based paint: whether it is necessary to wash it off with your own hands and how correctly, grouting concrete than washing and how, video 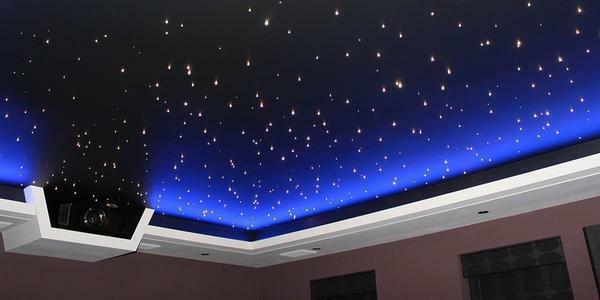 Design of ceilings from gypsum cardboard for a hall of a photo: the hands, a photo gallery, two-level and tension, pendant